This week at Bungie, we talk about pixels and the Kilts for Kids fundraising event!
Welcome to your first April 2022 installment of the TWAB. Yes, you read that right! We’re already in the fourth month of the year. Time is flying by, and we can’t help but wonder why. Maybe it’s the fact that we shipped an expansion in February, or the weekly hunts for Deepsight weapons that we’ve been embarking on. In any case, Destiny 2 keeps going strong.
Gambit Labs went live earlier this week. Invasion Swap has been getting us some great anecdotal feedback for Mote-dunking and invasion strategies, and we’re excited to see the data and feedback as it comes in. We did have a small hiccup on Tuesday where the Pinnacle reward for playing three matches was not appearing, but the team quickly issued a server-side fix to get you your just rewards. Paired with double Gambit rep, it’s a great week to complete some Seasonal Challenges for Bright Dust and earn some nice Gambit-themed rewards. 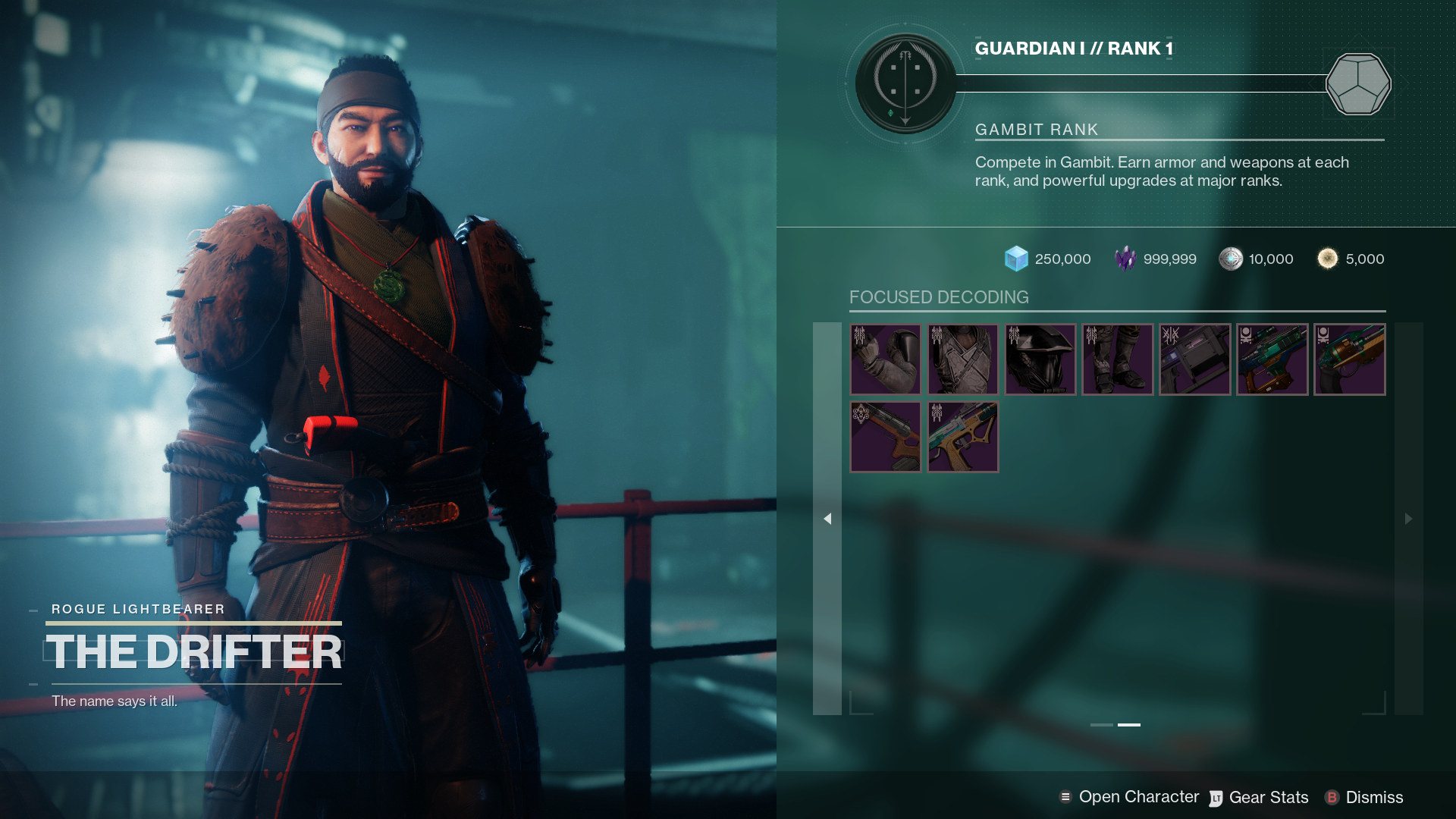 Grandmaster Nightfalls have also returned, bringing our most challenging strike content back into the fold. We’ve got a slight clarification on some patch notes back from launch dealing with Acute Burns. In Destiny 2 Update 4.0.0.1, it was incorrectly noted that these burns would not be present in Grandmaster difficulty. Acute Burns are intentional and replace the unique strike modifiers (smaller burns plus extra knockback or splash damage). The new Seasonal modifiers (invisible enemies, etc.) are not included in Grandmasters. We have updated our patch notes page to reflect. With that said, we highly recommend using some elemental damage resist mods on your chest pieces as you buildcraft for the difficulty.
Looking to next week, Iron Banner returns. While we’re planning a larger TWAB to cover upcoming changes, our one piece of advice to you this week is to spend your Iron Banner tokens, complete your Iron Banner quest, and redeem your Iron Banner bounties. We have some updates to Saladin and how he’ll be dishing out rewards, which naturally leads to the retirement of Iron Banner tokens and bounties. You have two Iron Banner weeks left to spend these tokens for rewards, including next week, so make sure to plan some time in the Tower to turn them in before the end of the final Iron Banner of the Season. Oh, and a small update from the team: we’re looking to prevent the abilities bounty for our final Iron Banners before next Season. We’ve heard (and felt) the feedback that it could be a bit time consuming, so we’re shifting to focus on objective and weapon bounties for the remainder of the Season. Happy hunting!
So, what else is going on this week? We’ll be celebrating the upcoming Kilts for Kids fundraiser and having a quick “story time” about a wonderful community event that occurred last weekend.

Year after year, the Bungie Foundation participates in numerous charity initiatives to raise funds for people in need. While we host our own streams and charity drives, once a year we dive back into our favorite kilts to drive for some wonderful goals in the name of support for children. We have some awesome incentives lined up, so read on for more!

Bungie Foundation: Kilts for Kids, our annual fundraiser that supports Seattle Ronald McDonald House (RMHC) is going 11 years strong! We bring you our usual suspects: Christine, Mark, and Forrest. After two years of stay-at-home orders, the crew was excited to take advantage of a rare sunny spring day in Seattle and don their kilts together. 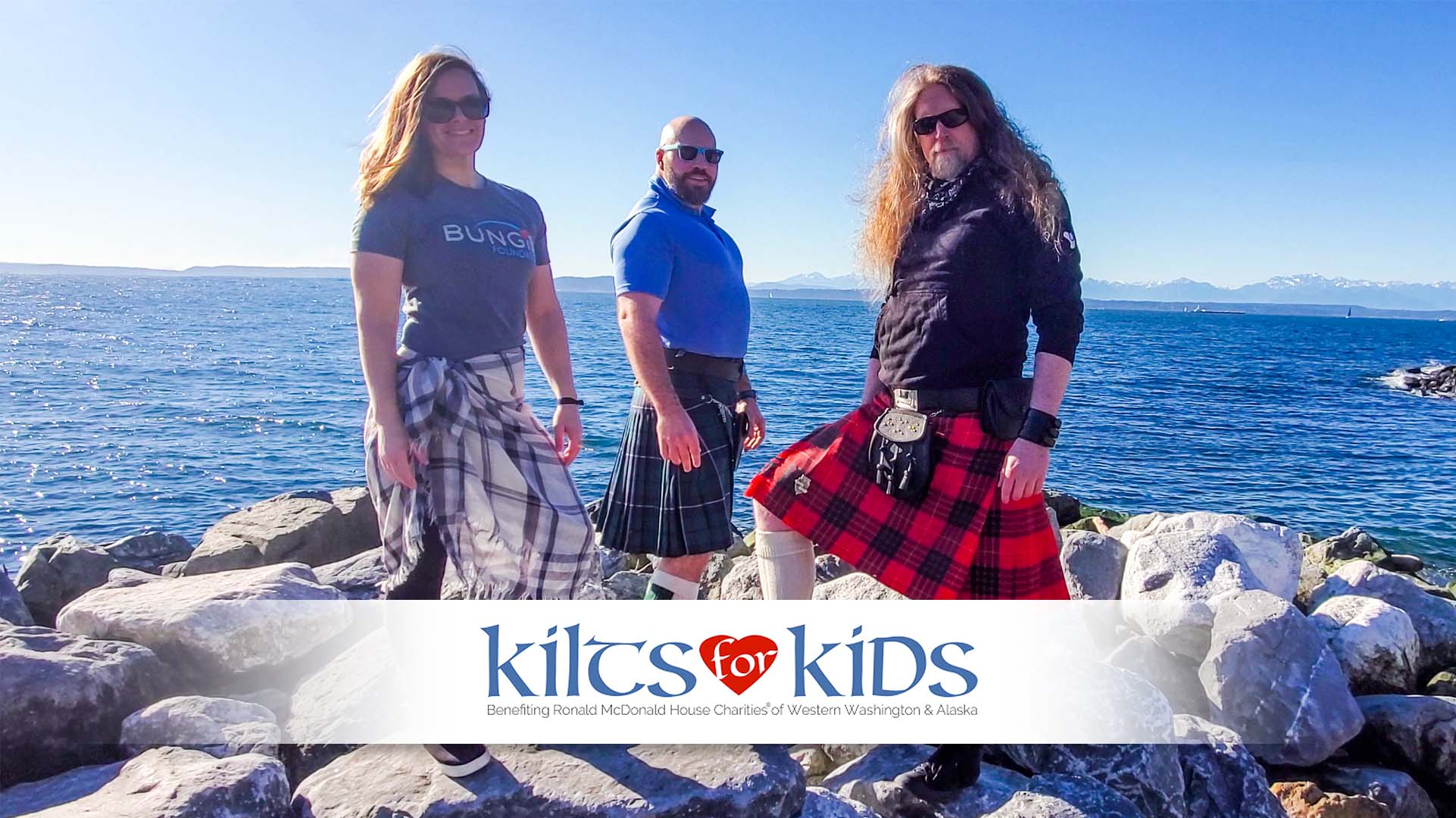 Throughout the pandemic, RMHC continued to provide exceptional care, safety, and community for so many families facing serious illness and long hospital stays. Help us achieve our $77,777 goal by heading to the RMHC Donation Page and casting your votes for Team Bungie. Each vote is worth $10 and every $30 donated will pay for a family to stay at the House for one night.
In addition to helping kids and families facing illness, we also have some awesome donation incentives*!

*Rewards will not be automatically redeemed, as we must receive donor data from RMHC before reward distribution. An email will be sent to donors at the end of the event, no later than Friday, May 6 with details on prize redemption. Some prizes will be delivered later than this date.
Thank you for bringing hope, smiles, and comfort to kids in need by participating in this fun annual tradition. We can’t wait to share the impact of your support with all of you!

PIXEL BY PIXEL, PLACE BY R/PLACE

Last weekend was one to remember. It started small with the placement of a pixel. Within minutes, it grew to four days of community, memes, art, Ace of Spades, and a raid boss that couldn’t stop moving their legs.
If you don’t frequently visit Reddit, a wonderful weekend event kicked off where any user in the world could place a pixel on a board to start creating small (or large) pieces of art. This wonderland of expression has appeared only a few times in previous years, going by the name of r/place. While your individual efforts could yield success for a short while, this place has become a home for Reddit communities (or communities in general) to rally their members to secure a place on the board.
Now, it’s not as simple as placing a pixel and calling it done. Participants could override a given pixel placement at any time (on a five-minute cooldown) to “take over” spots on the board, or simply bring some chaos to the conversation. This leads to a few things: intense community competitions between millions of different people from given message boards, communities, or even countries, all seeking to claim some place space. This also results in wonderfully positive moments when communities create alliances with each other, helping one another to defend their artwork as the weekend raged on.
Through the weekend, two Destiny specific Reddit communities, r/DTG and r/Destiny2, led the charge in securing a spot on the board to represent the Destiny community. Through Discord chats, text messages, forum posts, and multiple other means of communication, the community effectively locked down the “Destiny 2 spot” through all four days. This wasn’t just a simple tricorn, and I’m still blown away by the coordination between hundreds (to thousands) of participants to execute on the art below: 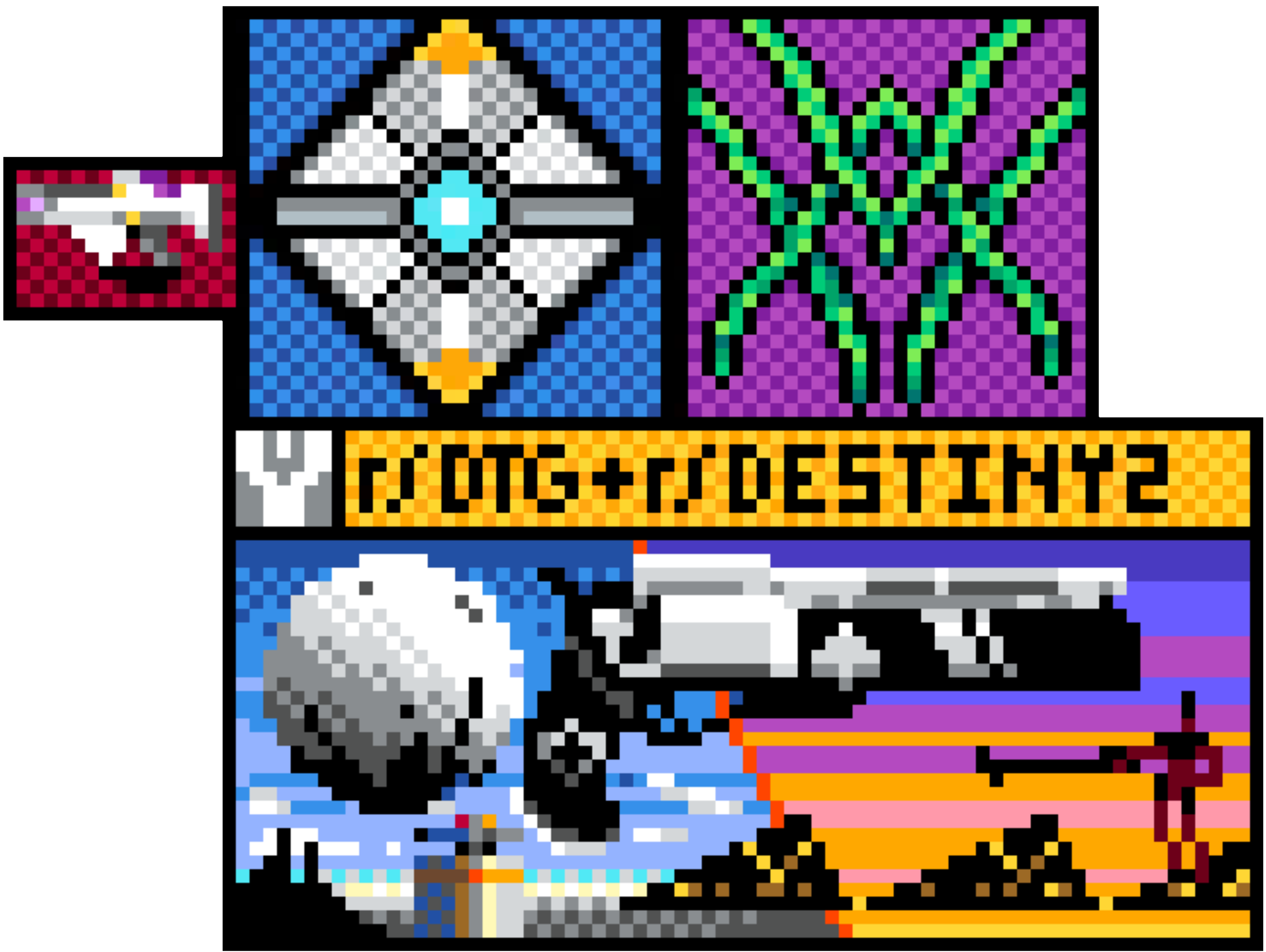 To celebrate their efforts and the alliances they made with other communities in gaming (and non-gaming communities), the following emblem is now available for redemption at www.bungie.net/7/en/Codes/Redeem.

Cheers to all who contributed over the weekend, and thanks for yet another year of fond memories to look back on whenever we reminisce about Telesto and its resiliency.

With the news we shared last week, some of you are imagining a day when you’ll reach Unbroken. With the help of PvP-centric Guardians around the world, your imagination may someday become reality! Our Player Support team has a quick update below on known issues.
This is their report.

Known Issues List  |  Help Forums  |  Bungie Help Twitter
UNBROKEN SEAL RETIREMENT
The Unbroken Seal and title will be retired with the launch of Season 19, and will be no longer available to earn. Season 16 is the last chance for players to begin making progress on associated Triumphs in order to earn the Seal, including reaching Glory Rank: Legend in three different Seasons.
Players who earn the Seal prior to its retirement will still be able to equip the title and associated gilding.
VOW OF THE DISCIPLE: THE CLEAVER EMBLEM AND TRIUMPH
We are currently working to grant The Cleaver emblem to players who completed the Vow of the Disciple raid during the contest mode extension. Players who qualified for the emblem can expect to receive it during the week of April 19.
KNOWN ISSUES
While we continue investigating various known issues, here is a list of the latest issues that were reported to us in our #Help Forum:

For a full list of emergent issues in Destiny 2, players can review our Known Issues article. Players who observe other issues should report them to our #Help forum.

SOMEBODY, PLEASE, PUT BABY IN THE CORNER

Sam: Happy TWABsday, Guardians! Is it just me or has this week felt like it’s taken forever and also flown by? Either way, we hope your week was super rad and we have a super fun movie we think you will really get a kick out of, an incredible 8-bit track, and can someone go check on the Child? They seem to be bullying a few Guardians again.
Movie of the Week: Give and Take Give and Take
Movie of the Week: The First Disciple 8-Bit
Movie of the Week – BONUS: Child of the Old Gods be like…

Hippy: Listen, OK, I’m going to keep it real right now and say life is freaking hard and sometimes, it’s easy to take it too seriously or to miss out on the beautiful parts of it. Because of that, we’re mixing meme madness with some truly spectacular art. Plus, we heard you liked chaos, so as a b-b-b-bonus round, we’re also throwing in an excellent representation of Titan awesomeness by one artist that had the gall, nay – the audacity – to be talented as all heck. They also managed to rear up those daydreams of a fully Exotic’d-out (that’s a word) Guardian! Not a Titan main? That’s cool, this artist also has other classes represented in a similar style, so peep out their account below!
Without further ado, let’s art!
Art of the Week: Guess Who Just Got Played!
Art of the Week: Elemental Warlocks, Skateboard Edition
Art of the Week – BONUS: Exotic Titans Go Brrr

TIME FOR SOME RAIDS… OR TRIALS?

Thanks for stopping by for another TWAB. If you ran through the steps in the TWAB last week and made sure you are signed up for Bungie emails, you’re likely receiving a Mechs vs Monsters poll right… now! Good luck to both #TeamMechs and #TeamMonsters for this year. Make sure to get your votes in before April 13.
Team Monsters 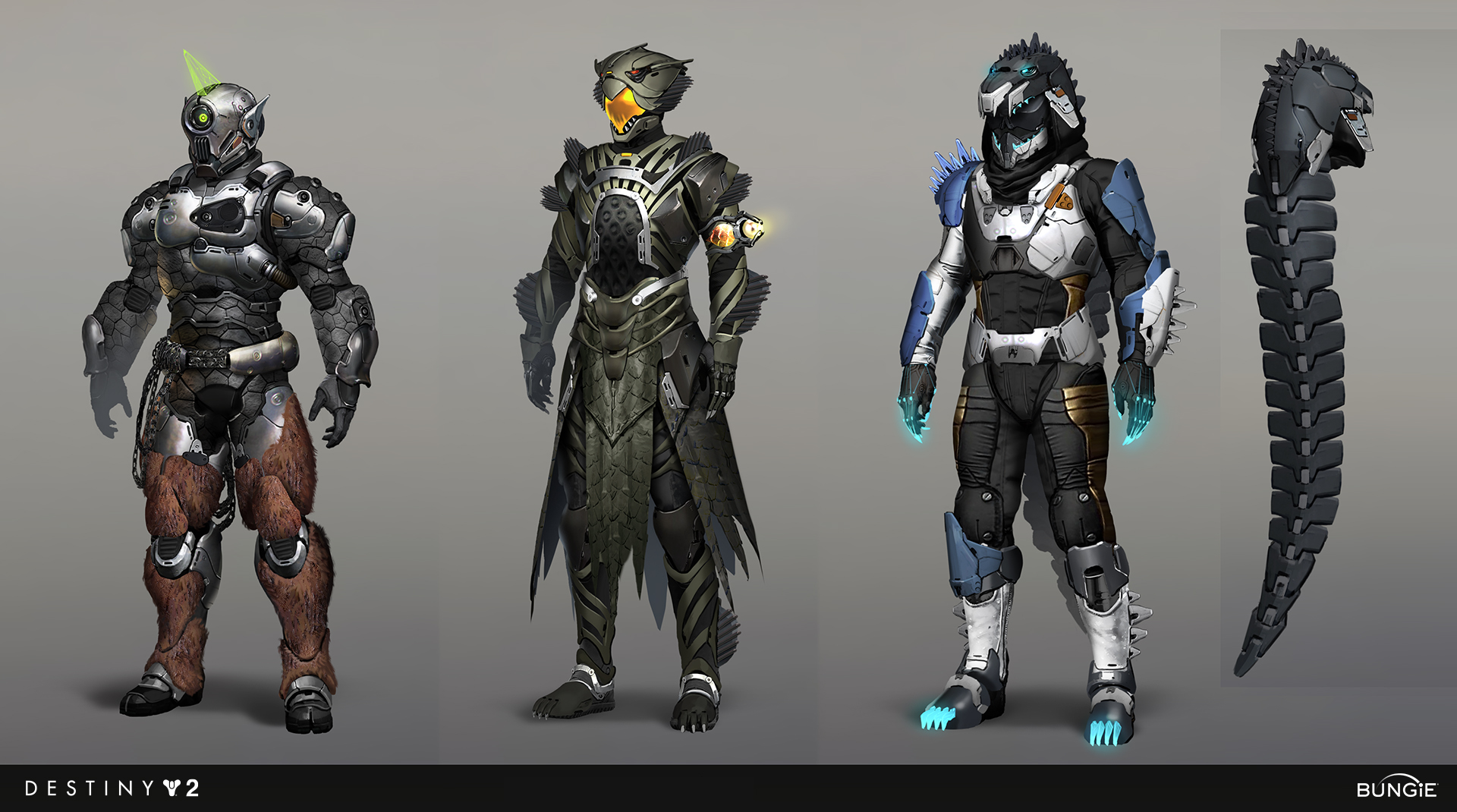 After you’ve gotten your vote cast, hop in to Destiny 2 for some fun. This weekend’s looking great for solo players seeking some Trials loot, as Freelance kicks off tomorrow at reset. If you’re looking for a little Wrath to add to your arsenal, it’ll be a fun weekend to jump in. If you’re looking for a more team oriented endgame experience, why not hop in to some Raids with friends? Maybe help a Blueberry or two to their first victory.

Looking to next TWAB, Master Vow of the Disciple is just around the corner, starting on April 19 We’ll be spending some time getting you prepared. Speaking of raids, tune in next Thursday for some fun news concerning an upcoming rotator of sorts in Season 17.
Cheers