The Vow Of The Disciple Boost features more Shaders , cosmetics and world drops !

Why would you want to buy Collective Obligation Boost from us?

Because Destiny 2 is a looter-shooter where every piece of gear matters, a huge amount of emphasis is put on the weapons and armor pieces players can obtain that each have random rolls or unique perks. There are several elements and damage types in Destiny 2, and plenty of different weapon archetypes as well, meaning there are many possible combinations to explore – some of which haven’t yet been explored. For example, the newly introduced glaive is a hybrid weapon that’s both a melee polearm and a projectile-shooting gun, but because it’s new there are only two variants: one that deals Void damage, another that deals Solar damage.

This limitation can be problematic when it comes to crafting builds because the elemental damage dealt by guns has an impact on the selection of mods and gear combinations one can use. Destiny 2‘s Vow of the Disciple Raid manages to break this trend for fusion rifles, which were widely used in Season of the Lost thanks to Particle Deconstruction, for which players have long been asking for a Stasis version. This is not the only trend that Vow of the Disciple breaks though, as another comes from the lack of new Exotic pulse rifles.

Many players made the assumption that Season of the Lost was the perfect place to have a Kinetic fusion rifle added into the mix because of all the possibilities it would have opened in terms of build crafting. One could argue that there are (and were already, at the time) two Kinetic fusion rifles in Destiny 2, with one being the Exotic Bastion and the other being an Exotic linear fusion rifle called Arbalest.

However, the Vow of the Disciple Raid finally added a Kinetic Legendary fusion rifle that also deals Stasis damage, which is a first in the history of Destiny 2. The weapon comes with unique perks that aren’t commonly found on other weapons, making it all the more special. Although Particle Deconstruction is long gone, it doesn’t mean Bungie won’t add it back into the seasonal artifact mod rotation in the future.

The other trend broken by the Raid is about pulse rifles, which have been a staple of the franchise since its early days. Many fans were upset that when Destiny 2 released and only featured returning Exotic pulse rifles in the loot pool, which is something that Beyond Light‘s No Time To Explain didn’t fix because it was also a Destiny gun brought into its sequel. Luckily, Vow of the Disciple’s signature Exotic is a brand-new pulse rifle called Collective Obligation.

It has major synergies with Void 3.0 changes, as it deals Void damage itself, and it’s the first new Exotic of its archetype to ever grace Destiny 2. Pulse rifles also received a decent buff across the board with The Witch Queen, now dealing 10 percent more damage to all enemies.

The Vow Of The Disciple recovs

Furthermore, Exotic weapons now deal 40 percent more damage to red-bar enemies, making Collective Obligation all the more powerful in the current meta. Ultimately, new additions to weapon archetypes or damage combinations are always welcome in the game, and Vow of the Disciple’s gear should just be the first step in the right direction 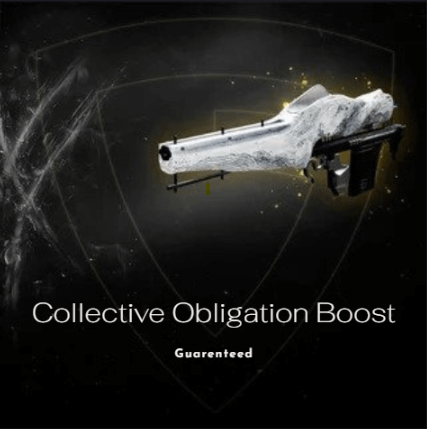 The new Destiny 2 raid that comes as part of The Witch Queen expansion, Vow of the Disciple, is officially starting very soon. You’ll be able to play it beginning March 5, and as with most Destiny 2 content, there will be a race to earn the World First title and the perks that come with it. Here’s what you need to know about the raid, including when it starts.

Vow of the Disciple officially unlocks on March 5 at 10 AM PT. As is standard, there will be limitations set in place–beyond the Exotics and weapon perks that have recently been disabled due to various issues that could break the raid’s encounters, Contest Mode will also be active. That will cap all players to 20 power below the recommendation for each encounter (somewhat similar to one of the ways Witch Queen’s legendary campaign increases the difficulty). During this time, Artifacts will not contribute to players’ power level. This all means that raiders will be limited to 1530 Power–a fairly achievable goal in the week and a half or so between the launch of The Witch Queen and that of the raid.

During the development process, the team spent a significant amount of time concentrating on various degrees of difficulty. After all, although dungeon-inspired systems and difficult encounters may be entertaining for certain players, the objective of a game’s campaign is to, you know, actually complete it at some point. The team’s frequent topic of conversation revolved around that precarious tightrope walk.

“I believe the most noticeable change will be an increased focus on large-scale action, exploration, and the creation of more suspenseful confrontations.” Destiny Test Lead Nathan Thorell described the game as “accessible.” “There are more instances when it gets a bit heated, but it’s still accessible.” It is intended that, whether you are alone or in a fireteam, you will find a difficulty level that is suitable for your skill and experience.

“We saw it as a whole experience,” McConnell said. In the same way that a tale requires calm times, peaks of interest and excitement, and also challenge, we wanted those elements to come together in ways that created a great deal of variance in the experience,” says the team.

Make Yourself a Legend
Then there are some Guardians who want something a little hotter and spicier in their meals. The kind of players that get out of bed in the morning and start dumping nails into their cereal bowls. Bungie sought to make sure that seasoned Guardians searching for a battle found a degree of difficulty appropriate to their abilities beyond the epic scale and diversity of the campaign objectives itself, according to the Bungie team. As a result, the Legendary Mode in The Witch Queen campaign has been implemented.

Legendary Mode will be accessible from the beginning of The Witch Queen’s campaign — there will be no need to complete the game first in order to access this higher degree of difficulty. What can gamers anticipate from the game? It was rigorous work by the crew, as Alex Pfeiffer puts it, to ensure that Legendary was just the perfect amount of perspiration, but also well worth the effort required to get through it.

In order to match the increased difficulty, Pfeiffer said, “we went in and very surgically tweaked variations on every encounter to match the higher difficulty.” He cited Darkness phases on large encounters, in which a team wipe causes players to reset to the beginning of the encounter, as an example. Along with spending additional time developing a structure for these high-impact missions – which included determining the number of big confrontations, opponent strength, and other factors – the team worked tirelessly to achieve a delicate balance so that the player would not feel overwhelmed.

Campaign Banners will be available for the first time in a Campaign, and they will provide a full Super, ability energy, and ammunition. As you successfully finish this very epic battle, we will offer you double the number of prize boxes [when compared to Normal Mode] on your first playing. All of this significantly increases the degree of intensity of the experience.”

“What we intended was for the rewards to be more fulfilling than they had ever been, regardless of the difficulty you choose.” That was made possible thanks to the collaboration of [Bungie’s] Joe Sifferman and the Rewards team,” stated Hopps. Meanwhile, we wanted to make certain that players felt rewarded and motivated for their time and work if they were ready to take on a more difficult task in the Legendary Mode. Players that successfully finish the Campaign on this more challenging level will be closer to becoming Raid-ready and will get extra special prizes.”

“Towards the conclusion of development, I had the opportunity to play through the full campaign on Legendary,” McConnell said. It meant a lot to me to finally be able to work up an appetite and break a sweat in the campaign. Despite the fact that I’ve been working on this team for a long time and have played the material to death with each release, it seemed like it was the first time I’d wanted to put the controller down and take a deep breath… and then dive right back into it. It was a genuine challenge, and it was refreshing and exhilarating to be faced with something new. As a long-time player, that was a real motivation for me.”

Hopps said, “We want players to feel like they’re really traveling to Mordor with the ring, rather than merely departing from the Shire.” As a result, every mission should seem like a huge adventure filled with surprises. To do this, you must divert the player’s attention away from the well-worn road and direct them to exciting and surprising locations.”

Destiny 2: The Witch Queen is set to be released today.