Season Of The Haunted

Why would you want to buy Nightmare Containment activity farm boost us?

Season Of The Haunted Nightmare Containment boost and Carry

The most recent public event to be added to Destiny 2’s Season of the Haunted is called Nightmare Containment. The following provides all of the information that is pertinent to the activity.

The Nightmare Containment is a public event that may be farmed and can be found in the new Derelict Leviathan patrol zone. It is quite similar to the Moon’s Altar of Sorrow. The activity may be located in the middle chamber of the Leviathan, which is referred to as the Castellum, and it is continuously active. After you have zoned in, go to the red Season of the Haunted sign and interact with it to begin the activity. This will allow you to plant your Nightmare Harvester and get started.

There are two different entry points available for loading into the Derelict Leviathan. It is imperative that you choose the ‘Containment’ option rather than the ‘Castellum’ option if the Nightmare Containment is something that you want to complete. Doing so will increase the likelihood that there are other players in the zone who can assist you. If you load into a zone and there is no one else present when you do so, just reload into the zone using the Containment option until you locate a group to join.

There are three different levels to the Nightmare Containment exercise. The first two tiers each consist of four stages, and the third and final level is the boss encounter. Even if you run out of time in the middle of a tier and are unable to finish it, you will still go on to the next one. At this moment, it is not known if failing a tier will have an effect on the awards you get.

Clearing out foes to acquire Shards of Dread is the first step in both Tier 1 and Tier 2 of the game. There is no need for you to store these shards somewhere, since your progression will be automatically computed after each kill. Dread Bearers will join the fight shortly after the yellow bar adversaries appear. These foes have enormous health bars, and taking them down requires coordinated efforts from numerous players. When doing damage, it is best to concentrate on a single target rather than spreading it out over all of the other targets.

When you defeat a Dread Bearer, they will drop a Core of Dread as their reward. Returning the core to the harvester will result in the creation of a Scythe, which you may use to rapidly eliminate any remaining Dread Bearers. Because the Scythe possesses both a devastating slam strike and a fast assault with a great range, it is imperative that you make full use of all of its charges in order to eliminate the remaining Dread Bearers. If you are able to gather all of the Shards of Dread within the time limit, then you will advance to the next level.

In the second level, you will need to eliminate enemies that are known as Egregore Atavists. In order for them to show up, you must first eliminate four Atavist Illusions, which are represented by yellow bars with white bars above them. Your markers should bring you right to them; however, you must ensure that you get within the bubbles created by Egregore Atavist before engaging them in melee combat, since the bubbles shield them from any kind of weapon damage.

The third stage is identical to the first, with the exception that this time around there will be far more Dread Bearers, including a couple of ogres. In the midst of all the mayhem, it may be tough to concentrate fire, but you should make an effort to pick a member of your team and remain with them so that at least two of you are firing at the same foe. As soon as you have defeated one, you should bring the Core of Dread back to the Harvester as quickly as you can so that it may generate a Scythe. Make another person eligible to produce a Scythe by removing another Dread Bearer with the help of the Scythe. Repeat the process until you have gathered enough Shards to go to the next level.

December 8 will mark Destiny 2 a big day, with the Prophecy dungeon’s long-awaited return now queued up to the next generation update, not to mention the Hunt Season’s initial Iron Banner PvP event.

In his latest blog post, Bungie announced a lineup for the update next week. Prophecy introduced during the Arrival season and removed prior to Destiny 2’s release will return as an essential weekly challenge. Beyond light. Nothing about the activities or loot of the dungeon has changed, but it would be cool if it had a Power-related dungeon.

The last level consists of a mini-boss that will appear in the same location as the Harvester that was eliminated. Because these opponents from the Cabal can take a lot of damage, you should aim to save as many of your supers and heavy ammunition as you can for this phase. When you have reduced the boss’s health to half, it will erect a shield around itself, and two Resonant Splinters will appear in the area. Destroy both of the splinters in order to breach the boss’s shield and go on to the next phase of the battle. Defeat it within the allotted amount of time, and you’ll advance to the next level.

The similarities between Tier 1 and Tier 2 are mostly superficial. When you reach Tier 2, there will be an increased number of Dread Bearers for you to contend with, and the mini-boss battle will now include four Resonant Splinters rather than two. After you’ve finished the first two levels, you’ll be able to go on to the third and final level.

You will have to face off against a Nightmare boss on the third tier. The Nightmare of Elykris, The Machinist, is the boss for this week; however, additional bosses will rotate in each week, including the Nightmare of Anaphex, Sword to Otzot, and the Nightmare of Navôta, Eir-Spawn. To begin the battle, you should eliminate any adds that are in the area and inflict damage to the boss until its health is down to two-thirds. At this time, it will acquire a shield, and you will be required to remove six resonant splinters that are strewn across the environment. After that, two emissaries will appear in front of the monster, and both of them must be eliminated before the boss can be defeated. After they have all been eliminated, you will be able to continue inflicting damage to the monster. When its health reduces to one-third, you will need to do this procedure once more. You must defeat the monster before the allotted time runs out in order to complete the Nightmare Containment and claim your reward. After that, you will have to wait two minutes before you may attempt to continue the activity at Tier 1.

It will vanish for some time, when the various pockets of interstellar matter distribute themselves across the galaxy. The mythic phrase, “then the Templar will use the Legate’s Hierophant’s Call to summon their legions,” will appear on the projector. This could cause a substantial amount of fanatics, but in turn it will produce some big Hydras and Hydras. By moving to higher ground, you would not have to contend with them. Enemies the number will be eliminated, then the old confluxes will reappear or new ones will have come into being, depending on how long the expanded time period of confusion continues For the second time, they must be protected against approaches by killing or restraining Vex, and sacrifice number four (four in total) must be avoided.

When the two confluxes are in play, the templar legions will be summoned again, the procedure is repeated for the third. After vanquishing the third Legion fortification, the fireteam moves on to the next place. 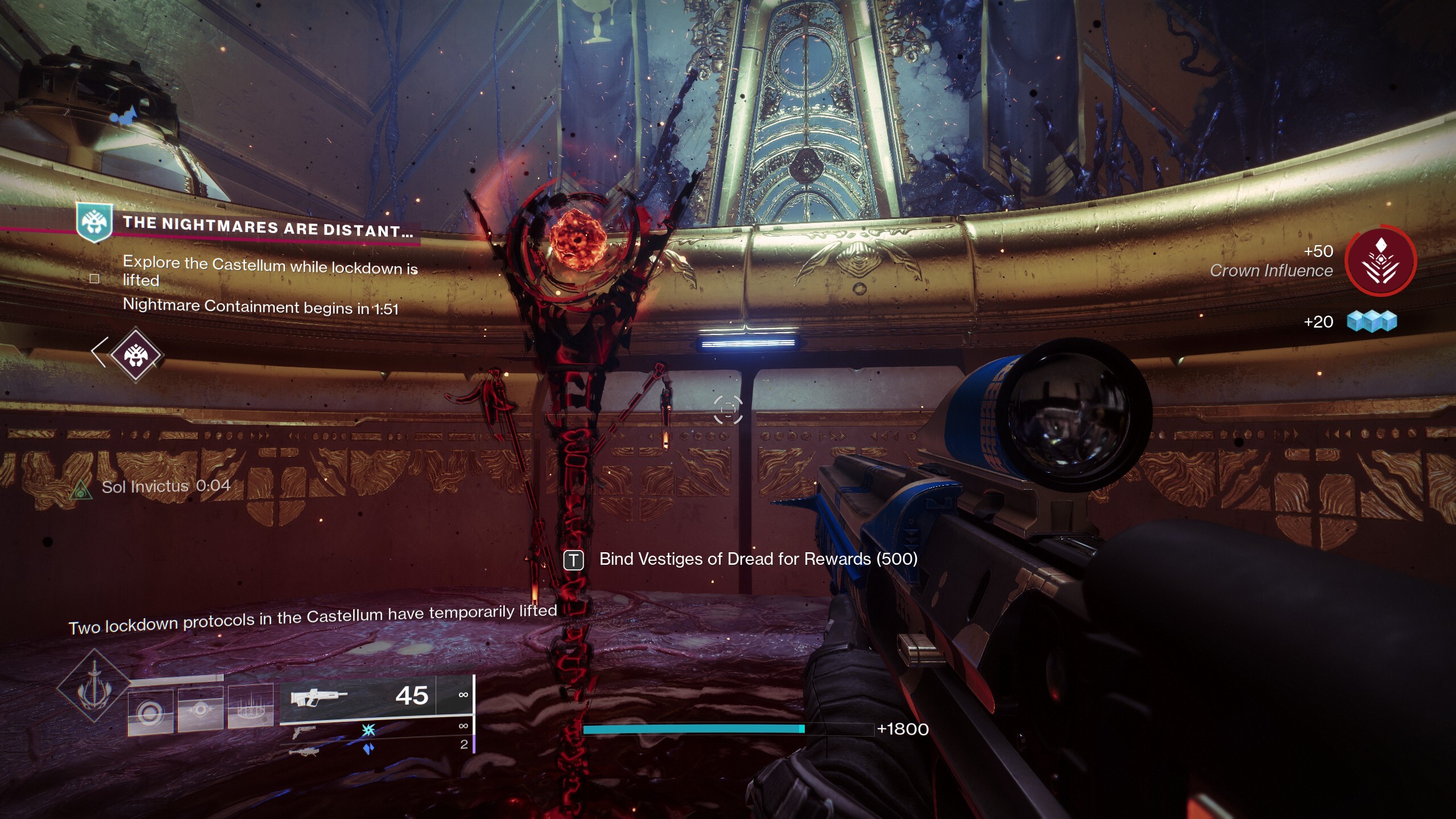 What Are the Rewards for Bringing the Nightmare Under Control?

You will be given a chest at the conclusion of Tier 3 regardless of whether or not you complete each tier within the allotted amount of time. It is not apparent what the consequences of failing any tier will be for the award. A variety of The Witch Queen world drops are included in the Nightmare Containment loot pool, along with the kinetic scout rifle Tears of Contrition, the arc glaive Nezarec’s Whisper, the void trace rifle Hollow Denial, the stasis rocket launcher Bump in the Night, and the new armor set Eidolon Pursuant. Additionally, there is a possibility that the box will include an Opulent Key, which may be used to unlock one of the secret chests located on the Derelict Leviathan. If you use the hint on your key to locate the appropriate chest, you will be rewarded with an Opulent Weapons Engram.

remnants of fear inside the confines of destiny 2’s nightmare

You may turn in 500 Vestige of Dread to the Harvester for extra benefits if you have enough of them. You will be given a legendary item from the pool as well as seven Risen Umbral Energy, which may be used to concentrate Umbrals at the Crown of Sorrow in the H.E.L.M. You will also get the Risen Umbral Energy. You also have a chance to acquire a Bound Presence, which you may use at the conclusion of the Sever action to unlock another chest and get even more Risen Umbral Energy and treasure. If you are successful, you will have both of these rewards added to your inventory.

It is possible to spend a lot of time farming for Vestiges of Dread, but the most efficient way to do so is to just explore the Derelict Leviathan, performing patrols and opening chests. Put on the Wombo Combo ghost shell mod to make it simpler to locate chests, then try to complete patrol missions as rapidly as possible to collect as many Vestige of Dread as possible.